A few years later M&W produced a twin hydraulic pump unit called the P2000. This unit had a hydraulic oil reservoir capacity of 56 gallons, along with this came many more design weaknesses. Again, this unit was only a loading device with a comparative readout, the same as the earlier units. 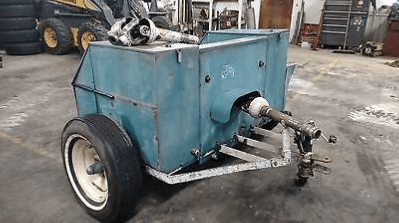 The 56 gallon hydraulic oil reservoir used by the P2000 provided limited test sessions, even with cooling water flowing through a pair of twin oil coolers. Again, M&W rated the P2000 at 460 pto horsepower @ 1159 rpm, twice the capacity of the P400.

These values were very over rated as the hydraulic pump manufacturer only rated each pump at 90hp @ 1800 rpm, or a total of 180 horsepower in combination with two pumps. One major design flaw resulted in many field failures. These hydraulic pumps were designed and rated for 1800 rpm operation. At this point in time many tractors only had 540 rpm for a pto speed. This is the reason M&W had to use a 3:1 speed up gear box as it was required to speed the pump(s) up to a range close to 1800 rpm rating on the hydraulic pump. so now, by requiring a speed increaser to achieve high torque loads while operating in the 540 rpm range, the most serious weakness or flaw became obvious.

As new tractor horsepower began to increase so did their pto speed. Newer tractors began having the 1000 rpm shaft operate between 1000-1300 rpms. These higher pto speeds caused high pitch gear box and hydraulic pump noise. But, what was being created by using a gear box to increase pump speed was even worse, the hydraulic pumps were cavitating. The best way to describe the cause of the pumps noise was that it was being starved of oil and was causing internal pump components to overheat. Even worse, through the cavitation process a vacuum was created on the back side of the pumps gear teeth which was producing sublimation. Sublimation would be the removal of the gears metal tooth surface without going through the molten stage. It is this process that the pump would eventually be destroyed and result in a complete mechanical failure. Sublimation could even occur during cold operation and while operating on lower horsepower tractors.

Since the M&W P2000 did not have a torque arm as required to measure torque, along with the fact that M&W recommended the operator not observe any power readings until the hydraulic oil reached 140°F, another problem was created. As the unit’s hydraulic oil temperature increased, more hydraulic working pressure was required to maintain the same operating rpm and torque load.  Higher the dynamometers operating temperature, higher the gauge readings. Even when operating at stable temperatures the observed power readings would run all over the spectrum. As observed and proven many times, the M&W could read as much as 10-15% high. Compound these higher oil temperatures with the high torque load, the greater the increase in gauge readings. As the University of Nebraska expressed their personal thoughts to me about the M&W Hyr0-gauge dynamometer they owned, “We use it to warm tractors up prior to beginning our official test on a real dynamometer”, no need to say more.

It was not until the early 1970’s that AW Dynamometer’s prony brake design began to become serious in the ag dynamometer market. During this period tractor horsepower began to increase at a rapid rate. M&W’s twin hydraulic pump dynamometer became overloaded, internally over heated, and test sessions were short. During this time period AW’s share of the ag pto market was about 15% with M&W having the remaining balance. It was during this same period John Deere introduced a new series of high horsepower four wheel drive tractors. Their largest, the model 8630 was rated at 225 pto horsepower and produced torque rise values in excess of 25%. By today’s standards this may not seem large, but it was huge then. While testing the 8630 using the P2000 dynamometer, which was rated at 460 horsepower, it was obvious that the dynamometer was over loaded and overheated very quickly during test sessions. Another observation appeared during these tests, while using the P2000, high horsepower readings were exceeding 285-295 horsepower, and this was not uncommon. In addition, as the tractor was lugged down during torque rise measurements the M&W P2000 pressure gauge would read up to 320-330 horsepower.

To anyone having been around power equipment it would be obvious from these high readings that John Deere would not send tractors out of their factory producing some 25-30% more power then they were rated. Of course, the power ratings John Deere used were provided by the University of Nebraska, the official tractor test lab. With a field accuracy no greater then 85-90% or greater, the natural tendency to read even higher as the hydraulic oil warmed up, test values during torque rise measurement were totally inaccurate during lug down tests. The psi kept increasing, at or below, peak torque. When using the P2000, while showing high horsepower reading in the field, service issues were being created with John Deere. The power values produced from the M&W dynamometer could not be trusted. At this point in time a majority of the Deere dealers had M&W’s.

John Deere invited M&W to bring their best and most accurate dynamometer to Waterloo, Iowa, for comparative performance testing. The comparative tests would be using John Deere’s quality audit dynamometer and a standard AW Dynamometer model Neb400. John Deere themselves were to conduct the tests using the AW and their own dynamometer. M&W operated their own equipment and provided John Deere with the best test results the P2000 could produce. Testing was performed using a John Deere model 4840 tractor. The results are as follows….

*Note:  Fuel was added prior to the AW test which would produce the additional power differential between the AW and John Deere’s quality audit.

As you can see, the test results showed the best machine M&W produced, power values are 11% higher than the other dynamometers, John Deere recognized the M&W was not a true dynamometer and was not to be trusted or used for field power complaints.

During the mid to late 1970’s, agricultural equipment manufacturers could not produce enough product to fill orders. With tight inventories and lengthened production lead times from M&W’s major hydraulic pump supplier Hydreco, the production of P2000 was slow. This was compounded by M&W having so many warranty claims for replacement pumps. All this resulted in M&W not keeping up with new production demand. M&W was forced at this time to source a new pump supplier. The Tyrone hydraulic pump was used as a replacement for the Hydreco pump. Tyrone pumps were not equipped with a pressure compensation wear ring, they would fail in a few hours when operating at high horsepower loads.

M&W did make an attempt to produce the P4450, a new design of dynamometer using a water brake. This was a last effort of slowing AW’s new dominance in the agricultural dynamometer market. One must give them credit, at least this unit did measure torque. Even being a true dynamometer, the unit suffered from the lack of performance during high torque, low rpm, and torque rise tesing. In the end, the P4450 proved to be ineffective against AW’s prony brake dynamometer. 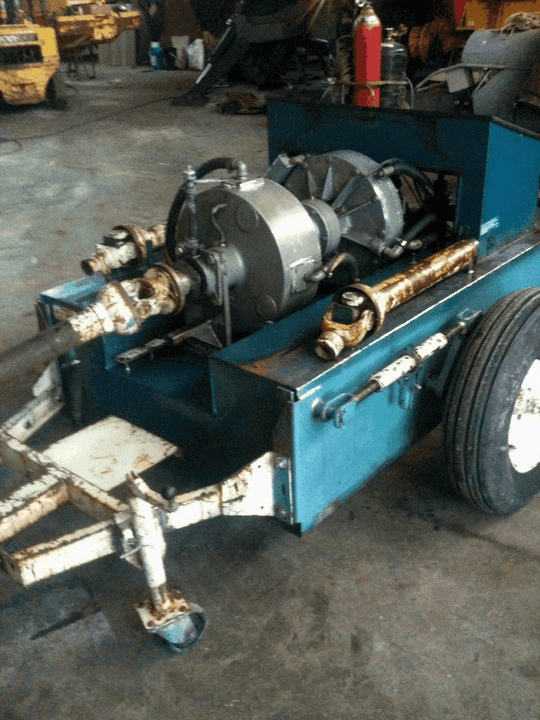 It was during the mid 1970’s when the farm economy began a new era, requiring higher horsepower tractors. Sales of farm equipment began to accelerate. It was during this time period when Dad and myself decided to go all out and capture the ag pto dynamometer market. This would require reversing the USA sales ratio of dynamometers between AW Dynamometer (15%) and M&W Gear Co. (85%). It was our decision to increase the USA representative sales force, a very aggressive advertising program, and a challenge to M&W to show up for competitive field demonstrations. AW and M&W had 42 side by side performance demonstrations, AW won every one. My father and I took this as a serious challenge. About 2 years later we had reversed the sales ratio and had become the number one manufacturer of pto dynamometers in the USA. It was not long after that we had become number one in the world. 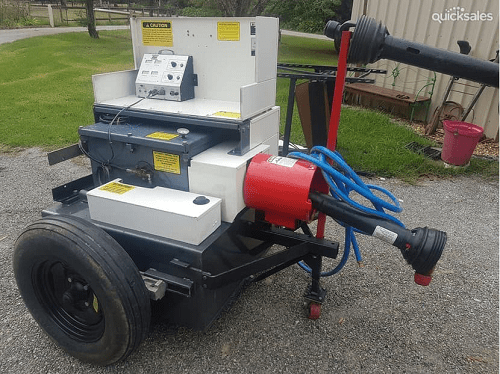 Since the early 1980’s AW was the only agricultural dynamometer manufacturer in the USA. It was during my tenure, up to the sale of AW Dynamometer in 2002, the company had many years where production exceeded 50% in exports. It was through that period AW Dynamometer had export distributors covering more than 75% of the the globe. In mid 1978 I was responsible for the introduction of the AW Model Neb600 pto dynamometer. I built this model as a hedge against any competition being able to penetrate our strong hold on the ag pto market. One of the key elements provided the Neb600 with the capability to absorb up to 3000 lb/ft of torque. It was at that point in time when tractor manufacturers began producing tractors with high torque rise.